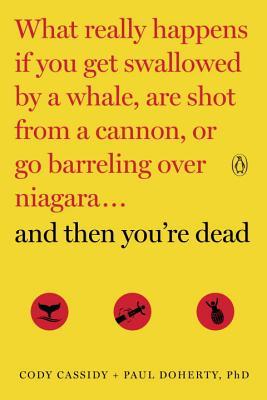 And Then You’re Dead: What Really Happens If You Get Swallowed by a Whale, Are Shot from a Cannon, or Go Barreling Over Niagara

A gleefully gruesome look at the actual science behind the most outlandish, cartoonish, and impossible deaths you can imagine
What would happen if you took a swim outside a deep-sea submarine wearing only a swimsuit? How long could you last if you stood on the surface of the sun? How far could you actually get in digging a hole to China? Paul Doherty, senior staff scientist at San Francisco’s famed Exploratorium Museum, and writer Cody Cassidy explore the real science behind these and other fantastical scenarios, offering insights into physics, astronomy, anatomy, and more along the way.
Is slipping on a banana peel really as hazardous to your health as the cartoons imply? Answer: Yes. Banana peels ooze a gel that turns out to be extremely slippery. Your foot and body weight provide the pressure. The gel provides the humor (and resulting head trauma).
Can you die by shaking someone s hand? Answer: Yes. That’s because, due to atomic repulsion, you’ve never actually touched another person s hand. If you could, the results would be as disastrous as a medium-sized hydrogen bomb.
If you were Cookie Monster, just how many cookies could you actually eat in one sitting? Answer: Most stomachs can hold up to sixty cookies, or around four liters. If you eat or drink more than that, you re approaching the point at which the cookies would break through the lesser curvature of your stomach, and then you d better call an ambulance to Sesame Street.”

When I decided to start a Nonfiction reading challenge I decided I needed to go to the library as soon as possible! ( Did I really need an excuse?) I decided to take it slow and see what caught my eye while browsing the library and this was the first book that really spoke to me. I mean come on that title and the striking yellow cover had me hooked!

Now let’s get into a little bit about its categorizing. This book is categorized as  612.002  the number corresponds to 612 Human physiology category. Which feels pretty accurate to me. To place the book in its proper category I use a mixture of Classify and Dewey Services two free websites that help explain the thoughts behind the Dewey Decimal’s categorizing.

And Then You Die was a great way for me to start the year! I love trivia especially random science trivia and I’ve already busted out facts from this book already so I for sure count that as a win for this book. This book is perfect for anyone who has ever been curious about strange ways to die. It was basically like a whole bunch of episodes 1000 ways to die the t.v. show that I used to watch and I loved that.

The writing of this book was really easy to enjoy as well there was a healthy balance between fact and humor and it made for a really great reading experience. The order of “ways to die” for lack of better phrasing was placed really quite well. The information you learned towards the beginning of the book was elaborated or expanded on in later sections and really helped make the material much easier to comprehend. Even though there was a lot of complex ideas in her it was still very readable and understandable.

Of course, since this book is about death so it is quite morbid. I would totally recommend it to my fellow science nerds!

7 thoughts on “Review: And Then You’re Dead: What Really Happens If You Get Swallowed by a Whale, Are Shot from a Cannon, or Go Barreling Over Niagara”